The terrorists beat up the teacher and took away the motorcycle in Lalmohan. 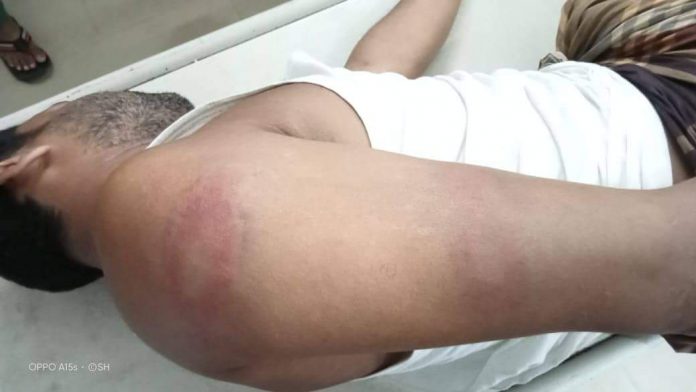 Lalmohan representative. A teacher named Ibrahim Liton was beaten up and seriously injured by the terrorists in Bhola’s Lalmohan. At that time, they snatched away the motorcycle and mobile phone along with the cash. The injured Ibrahim is a physical science teacher of Phulkachia Secondary School in Liton Upazila. His house is in Char Lengutia village of ward number 6 of Charbhuta union of the same upazila. He is currently undergoing treatment at Bhola Sadar Hospital. The attack happened on Saturday (01 October) afternoon in Muguria market of the same union. Injured school teacher Md. Ibrahim Liton complained that on Saturday afternoon he left home on a motorcycle and left for a tuition. When he reached near the local Muguria market, the local Gainbari Liton stopped him and said, ‘This engineer is Noman’s man, kill him’. Later, Chalauddin and Riaz of the local Pakar Matha area along with Liton publicly beat him with sticks in the market. They were led by the local Maqsud Howladar. When Ibrahim was seriously injured by their sticks, the assailants left him on the side of the road and left with his used Hero i Smart motorcycle. Later, the locals rescued him in a serious condition and brought him to the hospital. The people of the house saw his serious condition and brought him to Bhola Sadar Hospital in an ambulance. With their sticks, Ibrahim’s right hand was torn in several places and the knee joint of his leg was broken and swollen in different parts of his body. Ibrahim Liton also said that he is preparing to submit a written complaint to the police station. The accused Liton said that he did not beat Ibrahim Liton. Rather, he saw the matter on Facebook. He does not know who or who beat him. In this regard, the officer in charge of Lalmohan police station (OC) Md. Mahbubur Rahman said that he heard the matter through other people. However, no one has filed a written complaint or filed a case with the police yet. Action will be taken if complaint is made.

Know who is ‘Patal Lok’ Hammer Tyagi’s wife Tina, you will be stunned to see fitness