Greetings and exchange of views with expatriate journalists on the occasion of Abdul Muhith, Permanent Representative of Bangladesh to the United Nations. 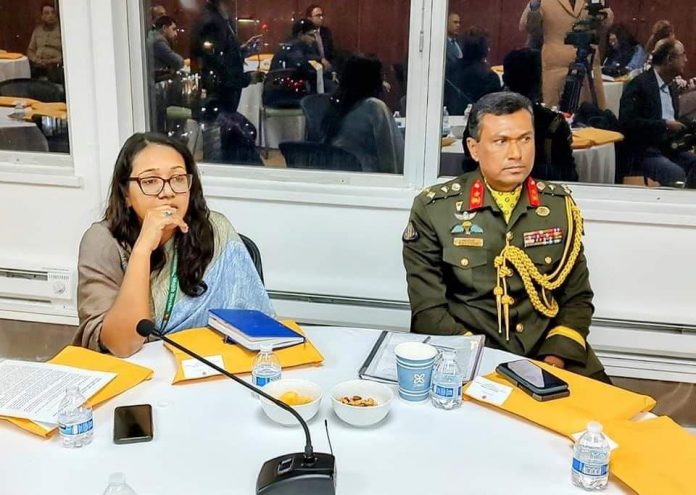 Hakikul Islam Khokon/Rimon Islam, United States Senior Representative:
On the occasion of ‘English New Year 2023’, the Ambassador and Permanent Representative of Bangladesh to the United Nations Mohammad Abdul Muhith organized a greeting and exchange program with the expatriate Bangladeshi journalists working in New York at the Bangabandhu Auditorium of the Permanent Mission of Bangladesh to the United Nations at 6:00 pm on Tuesday, January 17, 2023. Khabar Bapsnews. January 17, United Nations Bangladesh Permanent Mission New York
Permanent Representative Mr. Muhith welcomed everyone at the beginning and read the written statement. After Bangladesh became a member of the United Nations in 1974 till now
Highlighted the success of Bangladesh. Bangladesh currently
The United Nations is highly active in various forums, including peacekeeping forces
Working efficiently. Rohingya problem fast
Myanmar and the United Nations each on the solution
Bangladesh is working with the country.
International Mother Language Day is being celebrated on 21st February in every country of the world including the United Nations since 1999, this is the achievement of Bangladesh. The culture of peace is celebrated in the United Nations at the initiative of Bangladesh
being Mr. Muhith during his tenure Bangla Sangbad
Requested the support of the media and called to highlight Bangladesh in international forums including the United Nations
In response to a question from Eye-on-Bangladesh TV director Rimon Islam, the African country of Gambia Rohingyas.
Mr. Muhith explained the current status and progress of the case filed against Myanmar in the ICC & ICJ Courts for Genocide. Bangladesh Mission’s Defense Minister Brigadier General Sadek responded to Gambia’s case, newly appointed Bangladesh Ambassador to Myanmar Dr. Hossain answered the questions in detail. UN 3rd Committee Minister Mosammat
Sahanara discussed in detail about the Monica Gambia case. In this case, the former president of Myanmar, Aung San Suu Kyi, testified at the ICC Court, The Hague, Netherlands in 2019.
On the occasion of the English New Year in New York, the Permanent Representative of Bangladesh appointed to the United Nations held an exchange meeting
There is no pressure or direction from the United Nations regarding the upcoming national parliament elections of Bangladesh, said Ambassador Mohammad Abdul Muhit, Permanent Representative of Bangladesh appointed to the United Nations. He does not think that there is an opportunity to give such directions from the side of the United Nations.
Rather, he said, as a member state, Bangladesh is playing an important role in the United Nations.
On the occasion of the English New Year in New York, he said these things in response to the questions of the permanent representatives at the exchange meeting with print and electronic media. At this time, Ambassador Muhit said on the Rohingya issue, two resolutions against Myanmar have already been passed in the UN General Assembly and the Security Council. Mohammad Abdul Muhit expressed optimism that the initiative to send Rohingyas back to the country from Bangladesh may be speeded up by keeping these two propositions in mind. It was informed in the press conference that the writ challenged by Myanmar regarding the rationale of the case filed against Myanmar has been dismissed by the International Court of Justice. As a result, there is no hindrance in the proceedings of the case filed now. Speaking on the remittance issue, Ambassador Abdul Muhith said that the United States is now at the top in terms of sending remittances. which was previously occupied by Saudi Arabia. He thinks it’s all about channeling money in a legitimate way – something we can be proud of. He thinks that there is an opportunity to work on how to encourage the US diaspora in this place. Regarding the return of the murderer Rashed Chowdhury, who was sentenced to death in the case of killing the father of the nation, Bangabandhu Sheikh Mujibur Rahman, Mohammad Abdul Muhit said that the murderers are sheltered under a law in every country. So their repatriation depends on the legal framework of the country concerned. However, he said that all efforts are being made to take back the murderers. Ambassador Abdul Muhit said, “I have been here for only 5 months.” I have more opportunities to work. Permanent Representative Mohammad Abdul Muhith said that the time has not yet come to call himself a failure or a success. Earlier, in a written speech at the beginning of the exchange meeting, Ambassador Abdul Muhith highlighted the various works carried out by the mission in 2022. He wished New Year to all journalists of electronic and print media in New York. At this time, the newly appointed ambassador to Myanmar and deputy permanent representative of Bangladesh to the United Nations were present by his side. Manowar Hossain. At the end of the question and answer session, the journalists presented their respective identities. All the officials of the United Nations Bangladesh Permanent Mission were present at the ceremony. In-charge Press Minister Nasir Uddin thanked
He declared the program over.
Everyone is given a New Year gift.
At the end everyone was treated to dinner.

Mirage in ICC ODI Team of the Year